RESULTS ARE UNOFFICIAL UNTIL CANVASSED BY COUNCIL.

8/4/2020 -Happy Election Day! Election Results will be posted online at the Pinal County Elections website, see links below for results and live video.

Live Video of Tallying of Ballots

Candidate packets for the 2020 Primary Elections are now available.

Call for Elections in English and Spanish

Where do I vote?

This information is provided as a courtesy by the City of Eloy City Clerk’s Office. It is intended to assist in meeting the requirements for candidacy.  However, it is the candidate’s responsibility to ensure that all legal requirements have been met. The City Clerk’s Office cannot render legal, financial or other professional advice.

These forms must be filed at the City of Eloy City Clerk’s office, 595 North C Street, Suite 104.

Political Signs are not permitted to be located within the City of Eloy until June 5, 2020.

A.R.S. §16-1019 allows for the placement of political signs within the City’s rights-of-way. A.R.S. §16-1019(C) prohibits the City from removing political signs that meet the statute’s requirements, which include restrictions on size (sixteen square feet in areas zoned for residential use and thirty-two square feet in any other area).  The A.R.S. also prohibits placement that would cause a hazard (such as within a designated sight visibility triangle) or would violate the provisions of the Americans with Disabilities Act. The A.R.S. includes a requirement that the candidate’s (or their committee’s) name and telephone number or website address of the candidate or campaign committee contact person appear on the sign.

A.R.S. § 16-1019(H) states that the City’s prohibition on political sign removal applies to the period beginning sixty (60) calendar days prior to the primary election and ends fifteen (15) calendar days after the general election. For the 2020 election, the sixty-day period begins on June 5, 2020 and all candidate signs are subject to removal from the right-of-way on or after November 18, 2020. (Candidates that do not accrue enough votes to proceed to the general election ballot must remove their signs within fifteen (15) calendar days after the primary election by August 19, 2020.

Please note that it is a Class 2 misdemeanor for any person to remove, alter, deface or cover any political sign of any candidate for public office or in support of, or opposition to any ballot measure, question or issue for the period commencing forty five (45) calendar days before a primary election and ending seven (7) calendar days after the general election. For any candidate not advancing to the general election, the period ends seven (7) calendar days after the primary election.

For purposes of applying A.R.S. §16-1019, the City’s sight triangle regulations are illustrated as follows: 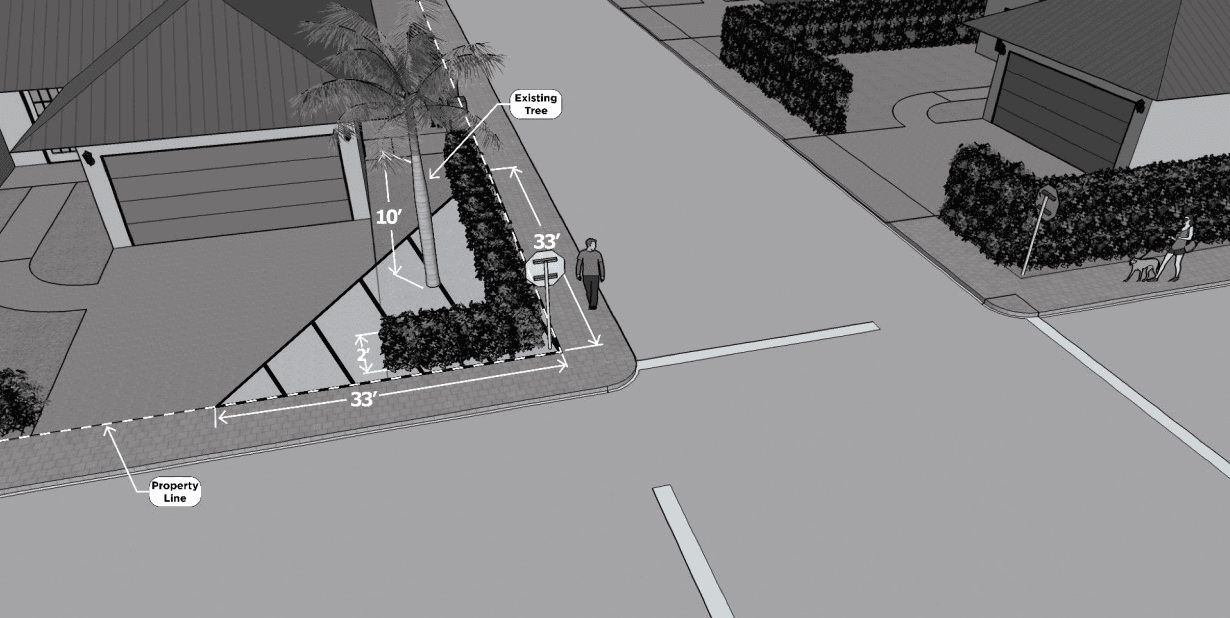 On corner lots, no signs in excess of two (2) feet in height shall be permitted within a triangular area as illustrated above.

Signs found to be in violation of A.R.S. are subject to removal.  Except in cases of an emergency, candidates or committees will, if possible, be contacted prior to sign removal at the number/email address shown on the sign.

Mayor serves for a term of two years and can serve unlimited terms.

Council Members serve for a term of four years and can serve unlimited terms.

To register to vote, you must be:

If you are registering for the first time within Pinal County, you must also submit proof of citizenship with your voter registration form.

Voter registration information can be found on the Pinal County Elections website.

Voter registration deadline in order to vote in the Primary Election, is by July 6, 2020.

Voter registration deadline in order to vote in the General Election, is by October 5, 2020.