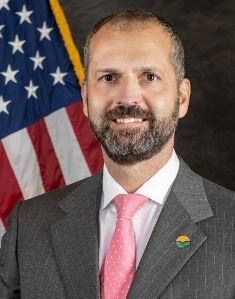 Georges Reuter was elected to the city council in 2018. He is a native of the Grand Duchy of Luxembourg. Georges Reuter first served as a Paramedic and Firefighter before earning a BA in Public Safety and working for the German Federal Criminal Police as a Detective Lieutenant. He was part of a special unit in charge of the dignitary protection of the German President, Chancellor, and Ministers as well as their international guests that included multiple U.S. Presidents and Secretaries.

In 2006, he was knighted to the rank of “Cavaliere OMRI" by the Italian President. In 2007, he was assigned to the Council of the European Union, to serve as a National Expert in the field of personal protection at the service of the Secretary-General and the President.

He moved to Eloy in 2010 and became U.S. Citizen in 2014. In 2016, he opened a parachute equipment manufacturing company in the old Chambers building on Main Street.

He worked as an instructor at the Eloy SkyVenture Arizona Wind Tunnel, training military and civilian students. He is part of the large Eloy skydiving community and a strong supporter of Law Enforcement and the Military.